Let n ≥ 3 be an integer. Let f(x) and g(x) be polynomials with real coefficients such that the
points

in R2 are the vertices of a regular n-gon in
counterclockwise order. Prove that at least one of f(x) and g(x) has degree greater than or equal
to n - 1.

Solution: Consider the polynomial p(x) = f(x) + ig(x), whose degree is the maximum of the
degrees of f and g and which maps { 1, 2, ... , n} onto the vertices of this polygon. With a suitable
choice of a complex constant

(equal to the center of the polygon), and a nonzero complex number

, we can replace this polynomial with the polynomial

, whose degree is the
same as that of p(x), that is, equal to the maximum of the degrees of f(x) and g(x), and which
maps

, in that order, where

Suppose not, that is, suppose

Now this system has a Vandermonde matrix, and can therefore be solved for the coefficients

, which are uniquely determined. (The determinant of the Vandermonde
matrix is

in that order.
But that polynomial is obviously

What we need to show is that q(1) cannot be 1. But that is obvious, since 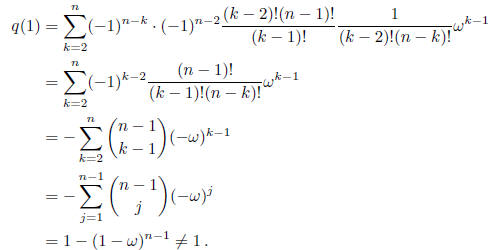 with the property that each element of G equals the product
of some subsequence. (The elements of G in the sequence are not required to be distinct. A
subsequence of a sequence is obtained by selecting some of the terms, not necessarily consecutive,
without reordering them, for example, 4, 4, 2 is a subsequence of 2, 4, 6, 4, 2, but 2, 2, 4 is not.)

Solution: If we make the convention that the identity element e can be represented as an empty
product, the constant c can be taken equal to 6. With this convention, the restriction to non-trivial
groups can be removed also, since a string of 0 elements will represent the only element in the
trivial group feg, and we'll certainly have 0 ≤ 6 ln(1) = 0.

Let G be any finite group, and let a any element of G different from the identity. Since G is
finite, a has finite order, say k ≥ 2, that is, ak = e. Let r be the unique positive integer such that

. Thus, at this stage, we can represent k elements of the
group using a string of at most

elements, taken from the sequence

If G consists only of the cyclic group H generated by a, we are done, and indeed c = 3 > 2/ ln(2)
will suffice in this case. If H ≠ G, let b be an element not in H, and let l ≥ 2 be the smallest
positive integer such that

. We now form the
sequence

elements. The set K of products of subsequences of
T consists of the elements

≥ kl, and we have represented every element
of the group by a product taken from the sequence T, which consists of at most

. We
then form the sequence

.
The products of subsequences of the sequence U form a set L of elements containing all products
of the form

, and then, by what was proved about the set K above, that

If L = G, we are now done, having represented every element of G as a product taken from
a sequence containing fewer than

It is now clear that this process can be continued until the group G is entirely exhausted.