#11: (Schroder) An n-pointed star has n points lying equidistant on a circle joined by n
straight lines. A point cannot be joined to a neighboring point on the circle. We
require that the start be symmetric, that is, the angle between the two lines that meet
at a point is the same for all points. Show that the number of n-pointed stars that can
be drawn with n lines using consecutive strokes without lifting the pen is (Ø(n) –
2)/2; hence a 6-pointed star cannot be drawn with 6 consecutive strokes.

The only valid stars are those that fill every node (all n of them). Once we pick a
distance to go for each line, the only stars that work are those that cycle around
back to our starting point after hitting every other node. If the distance we choose to
go is not relatively prime to n, then we will fail to reach every node and end up back
at our starting point too soon.

And so, the problem essentially boils down to finding how many numbers have an
inverse mod n. By Euler’s Phi-function, we see that there are Ø(n) numbers
relatively prime to n.

This is all fine and dandy, but one of the stipulations for the creation of a star is that
a point cannot be joined to a neighboring point on the circle. Thus, we cannot use 1
and n – 1 as distances to travel, since they would be neighboring our initial point.
Notice that 1 and n – 1 are among the list of those counted in Ø(n). Thus, we really
have Ø(n) – 2 numbers with inverses that we can use to create stars from.

This, however, counts too many stars. By the above method, going around the star
to the right and to the left create different stars, though the results will be the same
by symmetry. Consequently, we need to divide our total by 2 to remove all of the
duplications.

And so, we see that the number of n-pointed stars that can be drawn with n lines
using consecutive strokes without lifting the pen is (Ø(n) – 2)/2.

#1: Use Euler’s Theorem to compute the following quantities. 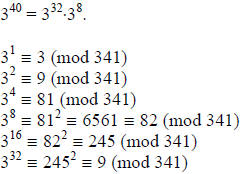 Since 7 and 100 are relatively prime, by Euler’s Theorem, we know that

. The question becomes, though,
what is the remainder when 89 is divided by 40? To compute that, we set up
another congruence, namely 89 (mod 40).

And so, we see that

We begin by breaking 72 into two factors, namely 8 and 9. Notice that by Euler’s
Theorem, we have that

Proof: By the definition of least common multiple, we see that

for some integer k and also that

for some integer l.

Likewise, we see that

. By the Chinese
Remainder Theorem, we see that

(because the two
numbers

(mod p). Since x
is arbitrary, we see that

is the numerator of

are divisible by p, show that

is divisible by p2. This result is
known as Wolstenholme’s Theorem.

Notice that a1 is the coefficient in front of the x term.

means i is
not included.

, which is the negative of above, and so
we have shown that the two are equal.

. This gives us the following equation:

Dividing both sides by p, we have the following:

Let’s examine this equation mod p2. Notice that the first p – 3 terms are all
congruent to 0 (mod p2), and so we are left with the following equation:

= kp for some integer k. That means that we have: