Definition 1. Cartesian Coordinate System - (or Rectangular coordinate system) consists of
two number lines in a plane drawn perpendicular to each other.

Origin - the point of intersection of the two axes is called the origin.

On the coordinate system we will be plotting points. To describe the points in this coordinate
system we use and ordered pair of numbers (x, y). The two numbers, x and y are called the
x-coordinate and y-coordinate respectively.

Definition 2. The graph of an equation is an illustration of the set of points whose coordinates
satisfy the equation.

REMARK 1. For the graphs above:
•The above graphs are called linear because they are straight lines.
•Any equation whose graph is a straight line is called a linear equation.
•They are also called first degree equations because the highest exponent on any of the
variables is 1.

3.1.3 Nonlinear Graphs
Equations whose graphs are not straight lines are called nonlinear equations. The key to graphing
nonlinear equations is to be sure to plot enough points so we can be sure of what it will look like.

3.2 Functions
The concept of a function is one of the most important in all of mathematics. We will discuss several
ways of thinking about and defining functions. But first:

EX 4. Suppose you are driving your car at a constant 40 mph. Can we find a correspondence
between the number of hours driven with the distance travelled?

Definition 5. A function is a set of ordered pairs in which no first coordinate is repeated.
EX 7. Determine whether the following are functions: 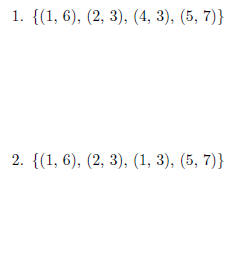 EX 8. Determine whether the following are functions:

2. Use the vertical line test to determine whether the following graphs represent functions. Also
determine the domain and range of each function or relation.

3. Critical thinking: Consider the graph (drawn on blackboard) which represents the speed versus
time of a student driving to school in the morning. Describe what might be occuring for this
function.

Warning: This is NOT multiplication.
EX 9. Let's consider the equation y = 2x + 1
•Notice that the value of y depends on x.
•If we plug in a value for x we get a value for y, different values of x give different values of x.
•We say that y is a function of x.
•In this case, we can substitute f(x) for y. This tells us what the independent variable is. It
explicitly states that the value depends on x.
•Our function becomes f(x) = 2x + 1
•We will use both notations interchangeably.

REMARK 2. We don't always us the letter f. Sometimes we use different letters for both our
function and our independent variable. For example g(x), h(x), P(t), etc. . .

EX 10. We also will evaluate functions with this notation.

Determine the Celsius temperature that corresponds to 131ºF