The Great Pyramid at Giza is the only one of the seven ancient wonders of the world that
is still standing today. The construction of this pyramid is a great mystery, even to modern
scientists. It is amazing to see the use of π and the golden ratio, Φ, in the building of this
pyramid. I will show various examples of the appearance of π and Φ by using the ratios
of the different dimensions, volumes, and surface areas taken from the Great Pyramid.
Finally, towards the end, I will even show how we can use the dimensions of the Great
Pyramid to find the dimensions of the Earth and Moon. Let us first start with the history
of the Great Pyramid at Giza.

2 History of the Great Pyramid

Of the many pyramids scattered across the deserts of Egypt, one stands bigger than the
rest. Located near the city of Giza, across the Nile from present day Cairo, the Great
Pyramid is a marvelous structure. It is one of the seven ancient wonders of the world,
and it is the only one left standing on the earth today. The Great Pyramid is not only
wonderous in size, but also an intellectually designed masterpiece. It is quite amazing to see
the mathematical concepts inscribed within the walls of this great structure. The degree
of accuracy used in the measurements of the Great Pyramid is incredible. The lengths
of the sides of the base differ by no more than

inches. Considering that each base is
approximately 755 feet long, this is outstanding accuracy. Also, the base of the pyramid is
actually level to within 1 inch. The pyramids built in Egypt were meant as tombs for the 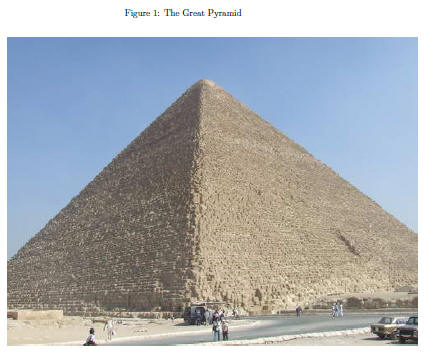 great Egyptian dead, both for the rulers and the relatives of the rulers, whom they believed
to be gods. Egyptian belief from the beginning of the first dynasty was that the king, or
pharoah, is incarnated as the god Horus, whose totem was the falcon. The Egyptians
believed the falcon to fly above all other creatures. So, when this king died, it is believed
that the god Horus is passed on to the next reigning king, with the dead king becoming the
god Osiris, the divine father of Horus. The pyramid is the residing home of the deceased
king.[3] The Great Pyramid at Giza was constructed as a tomb for King Khufu, also known
as Cheops, about 4,500 years ago. King Khufu lived from about 2551-2528 BC. One of the
earliest written accounts of the Great Pyramid comes from the Greek traveller Herodotus
of Halicanassus around 450 BC. He wrote that it took 100,000 slaves a span of 20 years to
complete the pyramid. This is most likely false, however, since the pyramid was already
about 20 centuries old, but it is still worth noting when discussing the history of the Great
Pyramid. It is unkown to this day, and probably will remain unkown for all time, the true
number of workers employed for this construction. The Great Pyramid, which originally
stood 481 feet tall when completed, was the largest building on the planet up until the 19th
century. It contained twice the volume of the Empire State building. Today, the pyramid
stands a mere 455.31 ft. This reduction in height is due to erosion and the theft of the
top most stone, called the pyramidion.[5] The Great Pyramid contains approximately 2.3
million bocks of stone, with the average stone weighing about

tons. With a reign of
30 to 32 years, it would have taken King Khufu’s builders a rate of about one

ton
stone for every two or three minutes during a ten hour day. Even with modern methods
of construction, this would be a lengthy and difficult task. One custom of the ancient
Egyptians was to bury the Pharoahs with a large treasure. Many wonder to this day the
whereabouts of King Khufu’s treasure, which has not been found. Many believe it is lost
due to robbers of ancient times. Others believe that it is still hidden somewhere in the
pyramid. Either way, the real treasure of the Great Pyramid at Giza is the remarkable
design, craftsmanship, and overall mystique of the structure itself.

3 Geometry Within The Great Pyramid

The pyramid originally stood approximately 481 feet tall, with a square base of side length
approximately 755 feet. The slant height of the pyramid works out to be equal to 611.45
ft., and the edge height equals out to 718.59 ft. Observe Figure 2 for a detailed picture of
the dimensions of the pyramid. A truly remarkable fact about these dimensions is the use
of π in the design. The vertical height of the pyramid is almost exactly equal to the radius
of the circle with circumference equal in length to the sum of the sides of the base of the
pyramid. In simpler form, the sum of the sides is equal to

So, the radius of a circle with circumference equal to 3,020 ft. is equal to

This is almost exactly the same value as the height of the pyramid. Clearly, the
architects of the Great Pyramid used this relationship with π to construct the pyramid. It
would be a great coincidence for this to happen unnaturally. An even deeper look into the
dimensions of the pyramid gives us a less obvious fact about the relationship between the
height and the length of the base. The ratio of the height to the side length of the base is
equal to one half π.

This is simply amazing considering that pi was not discovered until after 2000 BC by
the Babylonians. It is still unkown as to how the architects behind the Great Pyramid
knew of π, or from where the idea came from. One can only imagine the design process
that went into the construction. Further examination into the dimensions and properties
of the Great Pyramid gives us many more ”coincidences” that occur with π. Let’s take a
look at some of them.

First off, let us establish the volume and surface area of the Great Pyramid. The area
of the base, B, is given by 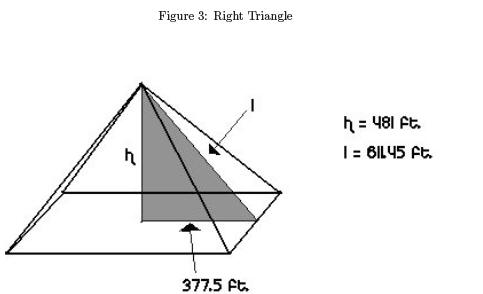 Let us take the right triangle bolded in Figure 3. The legs consist of the height, h, and
the length of half of one side of the base. The hypotenuse is formed by the slant height, l.
Now, if we take this triangle on all four sides of the pyramid, we get the shape in Figure 4.
Let’s find the ratio of the surface area, S.A.F.3, of this new figure to the area, A1, of one
side of the pyramid. The surface area of this new figure is given by

The area, A1, of one side of the Great Pyramid is given by

If we take the ratio of these two numbers, our result is quite interesting.

Yet another instance of the appearance of π within the slanted walls of the Great
Pyramid is apparant in the use of volumes. Let us take the right triangle from Figure 3,
and rotate it around the height, h, of the pyramid. The result is the cone in Figure 5.
Finding the volume of this cone proves to be an easy task.

Now, let us find the volume of the sphere that is formed by using the length of one side
of the base as the diameter. So, we get

Comparing these two ratios in fractional form gives us

This ratio comes within two thousandths of a decimal place off of the actual value of .
Could this simply be a coincidence? Historians and mathematicians debate this theory
still today. One thing is for certain, however - π appears numerous times when calculating
different ratios within the Great Pyramid. There is no denying that the Egyptians were
great mathematicians, and one can only wonder about the true extent of their knowledge.

Another interesting concept that is displayed within the Great Pyramid is the use of the
Golden Ratio. We know today that the golden ratio, represented by the symbol Φ, is equal
to approximately 1.6180. An easy discovery is made when we divide the slant height of
the pyramid by half of the side length of the base. First, we will find the slant height. Let
l represent the slant height.

We know also that the length of half the base is equal to 377.5 ft. By dividing the slant
height, l, by half of the side length of the base gives us the following:

We can see that this result is very close to the actual value of the golden ratio. Building
upon this discovery, we can also find the ratio of the lateral surface area of the pyramid,
L.S.A., to the area of the base, B. We already know that L.S.A. = 726, 310ft.2 and B =
570, 025ft.2. Using these numbers, we obtain the ratio of

Once again, it is unkown as to whether or not the Egyptian architects planned this in
the design of the Great Pyramid, but it is quite interesting to see it appear.

Another interesting fact, and a bit harder to prove, is that the Great Pyramid and the
relationship of the earth and the moon is very closely related. Look at Figure 6. If we
take the base of the pyramid and equate it to the diameter of the earth, then we can use
this relationship to find the dimensions of the moon. Let’s try this ourselves. In Figure
7, the large triangle is drawn with the same proportions as the Great Pyramid, including
the same base angles. Draw a circle with the center at point C and with diameter equal
in length to the base of the triangle. This circle represents the circumference of the earth.
Next, we construct a square with two sides perpendicular to the base of the triangle, and
all sides tangent to the circle. Notice the two shaded right triangles formed just above the
top of the square. Suprisingly, these two triangles form almost perfect 3-4-5 right triangles.
Next, construct a circle with the center at point M and radius equal in length to the
perpendicular distance from point M to point F. This circle represents the circumference
of the moon. Now, let’s look at the proportions we have created. The ratio of the moon’s
radius, Rmoon, to the earth’s radius, Rearth, is

As we can see, the ratios are very similar. From our construction, we can calculate a
ratio that is only two hundreths of a number smaller than the actual ratio. 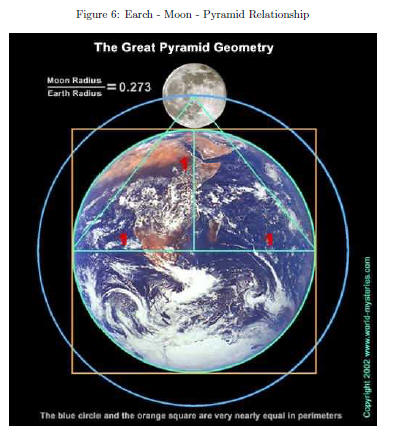 The ancient Egyptians and their methods of design and construction remain a great mystery
to this day. Theories about the construction of the Great Pyramid have existed for
thousands of years, ranging from alien involvement to simple methods of moving the two
thousand pound stones. It is clear to see the use of geometry in the design and construction,
but I find it even more intriguing to wonder why the Great Pyramid has lasted so
much longer, and in better condition, than most of the other Egyptian pyramids. It has
been tested by the ages, partly destroyed by the Arabs, and robbed by thieves of old and
new, and yet the Great Pyramid still stands tall as the only remaining ancient wonder of
the world.